Let’s keep our fingers crossed as negotiation with the ILA continues. Please see a JOC article below. ILA Talks to Continue This Week

“I am pleased to announce that five days of productive negotiations between the parties concluded on Saturday and that negotiations will resume (this) week under the auspices of the Federal Mediation and Conciliation Service,” FMCS Director George H. Cohen said in a prepared statement Sunday.

Cohen commended the ILA and United States Maritime Alliance “for their hard work and commitment to this process. The parties are making good progress on a number of difficult issues at the full committee and subcommittee levels.”

The FMCS would not comment further, but the talks’ resumption is viewed a positive sign for the negotiations. Cargo interests and carriers are eager for an agreement that avoids a work stoppage at East and Gulf Coast ports.

The mediator became involved after negotiations broke down Aug. 22, and helped get the talks back on track. The ILA and USMX agreed last month to extend the contract for 90 days, averting a threatened strike at the original Sept. 30 contract expiration.

Key issues in the negotiations include management efforts to address decades-old work rules and pay practices that require high staffing levels and raise overtime costs, especially in the Port of New York and New Jersey.

Many of those provisions are in local agreements that supplement USMX’s coastwide master contract. Bargaining on the New York-New Jersey local contract is planned for later this week between the ILA and the New York Shipping Association.

The ILA hasn’t had a coastwide work stoppage since a 1977 strike that targeted container, roll-on, roll-off and barge-carrying ships.

The Oakland Board of Port Commissioners intends to crack down on executives that spend port money improperly, including the maritime director who allegedly spent $4,500 to entertain industry executives at a Houston strip club.

Oakland board members on Monday will gather more information on the incident that allegedly took place in 2008. The board is scheduled to review the matter further at its regularly scheduled commission meeting Thursday.

The allegation involving James Kwon, maritime director, is part of a larger effort to strengthen the port’s expense reimbursement policies and to implement procedures to prevent the improper expenditure of port funds.

Oakland developed a policy in 2010 related to port-issued purchasing cards, and its audit division initiated an audit earlier this year of travel and entertainment policies.

The incident involving Kwon was recently revealed. The bill submitted in 2008 to the port for reimbursement was for drinks and dinner at D. Houston Inc., which is the corporate name for Treasures Strip Club in Houston, the port stated in a release.

“The Board of Port Commissioners takes this matter very seriously and will take whatever action is required to improve our financial oversight to ensure expenditures like this don’t occur in the future,” said Gilda Gonzales, president of the Oakland board.

Factory orders for manufactured goods for the month of August were down 5.2 percent or $24.9 billion from the previous month to $452,806 billion, the U.S Census Bureau reported. 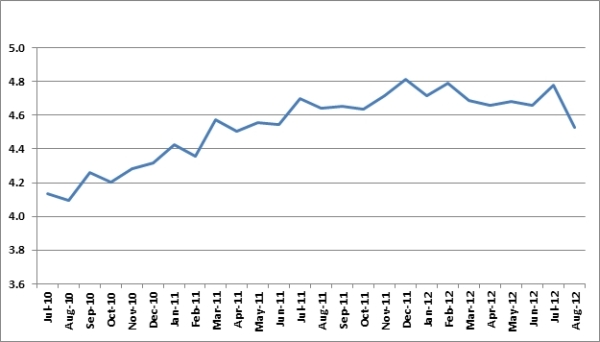 The drop followed a 2.6 percent increase in July. This is the biggest decline in more than three years.