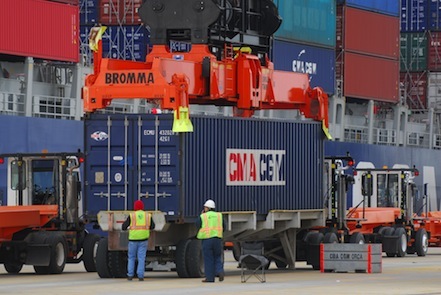 The International Longshoremen’s Association members will vote April 9 on a landmark contract that was starting to look impossible without a strike.

Months of stormy negotiations that twice brought East and Gulf Coast ports to the brink of a strike yielded a six-year agreement on March 13 — by coincidence, just as white smoke poured from a Vatican chimney to herald the election of a new pope.

Final agreement by the ILA and United States Maritime Alliance didn’t come easily. Some of USMX’s carrier members made an unsuccessful last-minute appeal for additional concessions. ILA officials said those changes would have been a deal-breaker and probably would have triggered the union’s first coastwide strike since 1977.

“We were able to avoid a crippling strike that would have done severe economic damage,” USMX Chairman and CEO James Capo said. “At the end of the day, what counts is that we got it done and that both sides think it is a reasonable contract. I think it was fair for both sides.”

ILA President Harold Daggett said union delegates “achieved a great contract for the rank-and-file members we represent. Our union worked hard for over a year to bring home a landmark agreement that I am sure our members will ratify.”

Throughout the negotiations, attention focused on the high-cost Port of New York and New Jersey. Neither the union nor employers were willing to sign off on a coastwide contract without a deal on the supplemental local contract covering work rules and other issues specific to the port.

Failure to reach a deal for New York-New Jersey likely would have triggered a coastwide strike. ILA officials in other ports said they were prepared to give their support, albeit grudgingly, to a walkout in support of the union’s demands at the East Coast’s largest port.

A showdown was averted when the ILA and the New York Shipping Association reached tentative agreement on the New York-New Jersey local contract on Feb. 7. They worked out final details the following week, clearing the way for negotiators’ final acceptance of the ILA-USMX master contract.

The complex interplay of local and coastwide contracts, set against a volatile economy and uncertain industry outlook, made these negotiations unique and unpredictable. “It was like riding a roller coaster in the dark,” NYSA President Joseph Curto said.

Everyone knew it was going to be a wild ride when Daggett arrived in Tampa in a black Bentley sedan for the March 28, 2012, kickoff of negotiations.

Daggett took office in July 2011, pledging a fiercely aggressive stance in the following year’s contract bargaining. He underscored that message the following March at The Journal of Commerce’s TPM Conference, when he bluntly warned that a strike was possible.

Carriers in USMX and the NYSA also signaled that bargaining wouldn’t be business as usual. Employer negotiators had unaccustomed support from European and Asian carriers’ home offices that traditionally stayed aloof from U.S. longshore bargaining. Some Container Lines made it clear they were willing to endure a strike if necessary to lower costs and improve productivity.

Ship lines were determined to limit their open-ended costs of per-ton container royalties that support annual payouts to ILA members under the coastwide master contract. Since caps on royalty payments were lifted in 2009, carriers’ royalty costs have jumped by some $180 million. ILA members’ payouts averaged $15,500 in 2011.

The new local contract replaces New York-New Jersey’s open-ended work schedules with regular and relief shifts capped at 16 hours each, and trims staffing requirements. The contract sets out a plan for hiring new workers, and for phasing out no-show and low-show jobs. Older workers will have a 60-day window to accept enhanced pension benefits and a $150,000 early-retirement incentive.

For the first time, the local contract sets productivity standards — 30 moves per gang-hour, rising to 35 moves per hour by the end of the six-year contract. Daggett said he’s confident ILA workers can achieve those standards and attract more cargo to the port.

For several weeks in November and December, master contract negotiations were deadlocked over container royalties. A compromise eventually fixed carriers’ annual royalties at their 2011 level of $211 million, plus up to $14 million a year for administrative expenses, and let the ILA and carriers divide any royalties exceeding $225 million.

The master contract also provides $1-an-hour wage increases in 2014, 2016 and 2017 in the ILA’s current $32 hourly straight-time pay for containers and roll-on, roll-off cargo. Starting pay will remain $20 an hour, but new hires will advance to top scale in six years instead of the previous nine.

The coastwide agreement also protects workers displaced by new technology, and ensures ILA jurisdiction over chassis maintenance and repairs in port areas. USMX did not seek changes in ILA medical benefits, which feature minimal co-payments and no premiums and are among the best of any union.

Carriers will pay an additional $1 an hour for ILA pension funds, which are badly underfunded in some ports. Ken Riley, president of Local 1422 in Charleston, said the added contribution is inadequate and may need to be revisited during the contract’s term. But Riley said he would support the contract’s ratification.

The new master contract extends carrier funding, though at decreasing levels, to subsidize the cost of ILA labor at union-staffed container freight stations. Employers failed to win reductions in minimum shift hours or lashing-gang sizes at South Atlantic ports, but local issues in those ports were considered secondary to the ones in New York-New Jersey.

Some of the large carriers in USMX were dissatisfied with the final deal, saying the master contract didn’t produce the cost cuts they were seeking, and that savings from improved productivity in New York-New Jersey and other ports would be hard to quantify.

On the union side, some rank-and-file discontent is apparent in New York-New Jersey, where workers question whether a $3-an-hour local pay differential in the new contract will offset their reduced work hours with the change to the new shift system.

Daggett has sent a letter to members urging ratification, and other ILA officials are working to sell the deal to members. About 14,500 ILA members are eligible to vote on the new contract, including 3,250 in New York-New Jersey.

The contract represents a hard-fought compromise that seemed out of reach at several points during the last year. The negotiations were punctuated by public bickering, walkouts by both negotiating teams, and meetings that seemed to go in circles while accomplishing little.

The low point in negotiations may have come in August, when a scheduled three-day bargaining session in Delray Beach, Fla., collapsed almost as soon as it began after a meeting the previous night made it clear no progress would be made.

“We had a lot of canceled reservations,” said Capo, who was scheduled to retire at the end of last year but stayed on to finish the negotiations. “We’d reserve a hotel for four days of meetings and be gone in two.” He said the up-and-down trajectory of the bargaining was unlike anything he’d experienced in his 47-year career.

Things didn’t level out until the Federal Mediation and Conciliation Service joined the talks in early September, when negotiations were dead in the water. The FMCS brokered two extensions past the contract’s original Sept. 30 contract expiration, averting threatened strikes both times.

Participants on both sides praised FMCS Director George H. Cohen and his team of mediators for dealing with the personalities and keeping the negotiations moving toward an agreement. “I don’t know that we’d have gotten this done without them. I really don’t,” Capo said. “Ultimately, it always comes down to management and labor to get the deal done, but the FMCS was very helpful in keeping us at the table and keeping us focused.”