In an article reported by JOC (below), no one should deny the importance of latin America and U.S trades.

Latin America may have a long way to go if it’s ever going to replace China as the largest exporter to the U.S., but the region is certainly making its presence felt in products as diverse as automobiles, electronics and apparel.

Two-way trade between the U.S. and Latin America increased 82 percent over the past decade, compared with a 72 percent increase in U.S. trade with Asia and 51 percent with Europe, according to a report by the Congressional Research Service.

U.S. containerized imports from Latin America are growing faster than U.S. exports to that region, according to PIERS, a sister company of The Journal of Commerce. Imports from South America, Central America and the Caribbean were up 6.7 percent in 2011, and are projected to increase 6.7 percent again in 2012 and 10.4 percent in 2013. 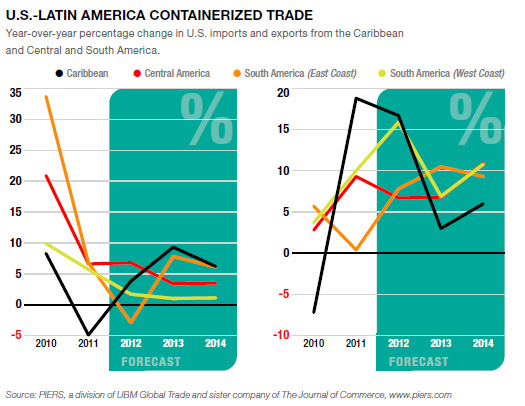 Latin America plans to increase its merchandise exports, however, as U.S. companies shift some of their sourcing away from Asia. Wages in China are rising, and the yuan in recent years has increased in value against the dollar, making exports from Latin America more competitive in the U.S.

The Panama Canal expansion project also will provide a boost to hemispheric trade when it is completed in 2015. Ports in the U.S. and Latin America are deepening their harbors and building modern marine terminals to accommodate ships capable of carrying 8,000 20-foot-equivalent container units and more. Panama already is staking out a position as a transshipment center for the north-south trades as it expands port facilities on both ends of the canal.

If Latin America addresses these challenges, it will build on its natural advantages of proximity to the U.S. market, competitive labor costs and cultural similarities to make the region an important location for near-sourcing to the U.S.