ETC International Freight System was forwarned by Zim Lines about a future congestion fee of $ 1000 per container or so from the East Coat ports most likely coming up in December. This is in connection to the ILA Labor Negotiations. On a more personal note, I wish our congress would step in and ratify some of the Union excesses, such as a decrease of 30% on their salaries and no retirement plan inside their coalition or forced political contribution taken out of their members. Man up to it & match what the liberal professions struggle for every day. You can apply some of that to most of our bureaucrats.

Keeping you in the know with the aftermath of Hurricane Sandy with News from JOC. Additionally from JOC information on the ILA Labor Negotiations. NY-NJ Terminals to Operate on Election Day 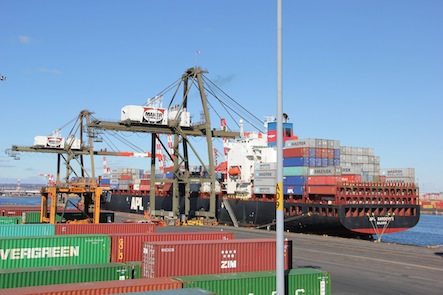 Container terminals at the Port of New York and New Jersey will be open Tuesday, Nov. 6 — normally a longshoremen’s holiday for election day — as recovery efforts from Hurricane Sandy continue.

Port terminals reopened Monday morning following restoration of electricity to the terminals over the weekend. Port Newark Container Terminal said its truck gates were operating today but were slowed by difficulties with the electrical supply.

Shippers are dealing with delays resulting from the rerouting to other ports of several thousand New York-New Jersey containers.

By the weekend, the Port of Virginia had handled some 9,000 containers of various sizes, along with more than 3,000 vehicles, that normally would have been discharged at New York-New Jersey.

APL said four vessels that carry its cargo in multicarrier alliances were sent to Norfolk. They were the MOL Dynasty, APL Indonesia, MOL Destiny and Maersk Holsata. Some of the Maersk Holsata’s cargo was discharged at New York before the ship left the port to avoid the hurricane, APL said.

Evergreen Line invoked force majeure, the contractual clause releasing the carrier from liability for losses in a disaster, for sailings of three vessels that had been scheduled to arrive in New York-New Jersey when the hurricane hit.

Customs and Border Protection issued a notice on procedures for filing manifest data on diverted cargo.

Negotiations between the International Longshoremen’s Association and waterfront employers represented by United States Maritime Alliance have been tense from the start last spring. A peak-season strike was averted in September when the two sides agreed to extend their Maine-to-Texas master contract for 90 days. But with difficult issues still to be settled, shippers remain apprehensive. Roll over the dates with your mouse to see how we got to this point:

ILA Negotiations: Where Are They Headed?
Will There Be an ILA Strike or Lockout?
ILA, USMX Optimistic About Labor Contract Negotiations

Negotiations between the International Longshoremen’s Association and waterfront employers representated by United States Maritime Alliance have been tense from the start last spring.
MORE »