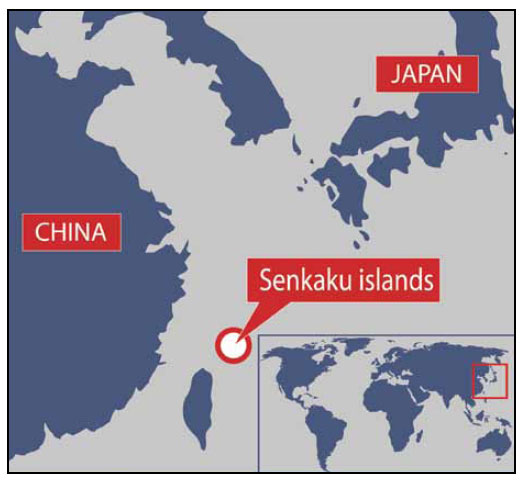 Analysts are hopeful that trade between Japan and China will improve gradually this year after a 2012 slump made far more painful by a territorial dispute over a group of islands in the East China Sea.

Yet some fear the tension between China and Japan, two countries with a long history of antagonism and grievances, instead could deteriorate as foreign policy hawks enflame nationalist sentiment in both countries.

War is now a real possibility and could quickly turn pan-Pacific, given the United States’ obligation to aid Japan, some doomsayers warn. That could devastate international trade news and economic growth.

Japan’s nationalization of the Senkaku islets last September sparked furious protests in China — which claims the islands as its own and calls them Diaoyu — as well as boycotts of Japanese products and attacks on Japanese-owned businesses.

Sales by Japan’s best-known companies screeched to a halt in one of the country’s largest overseas markets, giving an already poor year for exports an even more downtrodden hue.

Trade between the two countries fell 3.9 percent in 2012 from a year earlier to $329 billion, the first decline in three years, according to figures from China’s Customs Administration. Chinese imports of Japanese products fell 8.6 percent year-over-year, with the decline especially steep as the Senkaku-Diaoyu dispute reached fever pitch in the final quarter.

Flights that were canceled between the two countries have largely resumed, and some forwarders report shipment volumes by air and sea have recovered. There are encouraging signs that trade and trading relations are improving — sales by Japanese automakers rose in the latter months of last year, for example. But the rhetoric between the two countries’ politicians is hitting new heights, and that’s now being joined by military might.

In a January editorial, The Economist warned that China and Japan were “sliding toward war” as military maneuvers intensified. Fighter jets were deployed over the islands in January, and both sides have insisted they will not shy away from firing the first shot. The Chinese Navy also admitted targeting a Japanese warship with its weapons radar.

The territorial dispute, which hit the financial figures of major Japanese automakers and electronics companies last year, already is prompting many Japanese companies to reduce their reliance on Chinese factories in a bid to reduce risk. Japanese expansions increasingly are focusing on Southeast Asia, although many companies have little option but to try to secure sales in Asia’s biggest and fastest-growing market.

Forwarders paint a mixed picture. Henry Schmidl, director of ocean freight for Hong Kong and South China at Schenker International, said political issues between China and Japan might have had some negative impact last year. “However, looking at our performance, we actually cannot confirm that,” he said. “Our volumes to Japan have increased substantially with double-digit growth.”

Claus Schensema, managing director of GAC Forwarding & Shipping (Shanghai), said trade between China and Japan was down, but he’s optimistic of a rebound in the second quarter.

The dispute and subsequent trade downturn with China is another burden for Japan’s ailing economy, which registered a record high trade deficit in 2012. Total Japanese exports fell for seven consecutive months in 2012 and shipments slumped 5.8 percent year-over-year in December. This further damaged a Japanese economy already struggling with the strength of the yen and weak European demand that have strangled exports.

Several analysts predict that Japan, with a new government promising trade aid and monetary easing, will experience an export boost this year. That would help shrink a trade deficit exacerbated in 2012 by rising energy imports after the closure of numerous nuclear-powered electricity generators in the aftermath of the March 2011 earthquake and tsunami. Any further protests against Japanese products or a further deterioration in political relations with China, however, could snuff out a recovery before it gets started.

“The Japanese government recently rolled out its monetary easing, expecting to further weaken the yen,” she said. “This makes Japanese products more competitive in international markets but, at the same time, makes Japanese investments overseas more costly. The net effect remains to be seen.”

China is engaging with Japan and South Korea on a possible free trade agreement, she noted, with the last meeting in November. “We are positive on overall trade development in North Asia,” Thygesen said.

The future of China-Japan trade, and the general well-being of the region and the global economy, would benefit from a widening of such talks to reduce tensions and help calmer heads focus on the long-term benefits of good relations, rather than the short-term gains of populist nationalism.