From TPM: Maersk’s Skou Optimistic on 2013 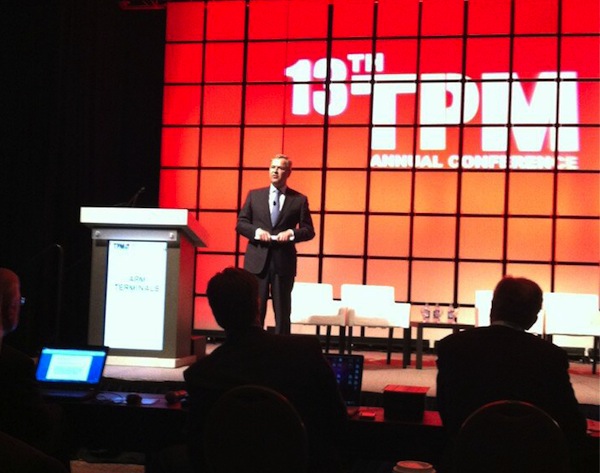 Skou said global vessel capacity is expected to rise 10 to 11 percent this year while demand rises only 4 to 5 percent. He said, though, that the gap could be bridged by scrapping, idling and slow-steaming of vessels.

“These are the three levers we can use,” he said. “We have to be able to live in a world of overcapacity.”

Maersk posted operating profit of $461 million last year, a turnaround from a $553 million loss a year earlier, as revenue grew 8 percent to $27.1 billion.

Skou said 2013 presents container lines with a bigger challenge, but that the industry is becoming “smarter” about matching capacity with demand.

He noted that carriers skipped 31 sailings totaling 182,000 20-foot-equivalent units during the recent Chinese New Year, when ships otherwise would have sailed largely empty.

Carrier profits have been hurt by an oversupply of big ships in the Asia-Europe trade, but Skou said a shift in Asia-to-U.S. East Coast routings to Suez Canal transit from the Panama Canal is providing a relief valve.

Just five years ago, 90 percent of Asia-U.S. East Coast routings were via Panama. That ratio has dropped to 60-40 as carriers have deployed larger, more efficient ships from Asia-Europe routes.

Vessels bumped from Asia-Europe are being shifted to other routes, where they’re displacing smaller, less-efficient ships that are being returned to non-operating owners or sent to the scrapyard, he said.

Maersk plans to take delivery this year of five of 20 Triple E ships, which will have nominal capacity of 18,000 TEUs each, but those vessels won’t be fully deployed until 2014. He reiterated that Maersk would keep its capacity in line with market demand in Asia-Europe, where the big ships will be used.

Trans-Pacific rates being negotiated this spring “will be higher this year than last year,” Skou said. He said Asia-U.S. rates have been essentially flat and that carrier margins on earnings before interest and tax have averaged just 1 percent since 2006, a situation he called unsustainable.

He said Maersk is “fairly optimistic” about growth of the U.S. market. He cited recovery of the housing industry and upward trends in other economic indicators. Europe’s economy remains sluggish, but Skou said carriers must cope with it.

It’s unrealistic to expect container market growth to return to the nearly 10 percent annual average it enjoyed between the mid-1970s and 2008. Carriers must recognize that and deal with it, he said.

Skou used his TPM speech to announce eight customer care targets that Maersk is unveiling as a result of meetings with 1,000 customers who said their advice to the carrier was “don’t try to be different, just try to be good.”

U.S. importers face severe delays in getting their cargo cleared at major seaports and at the Canadian and Mexican borders because federal sequestration will reduce Customs and Border Protection manpower.

Container examinations at seaports could take an extra five days or more, and the agency warns of  “significant daily backups for truck shipments at land ports.” Importers that are members of trusted trade programs such as the Customs-Trade Partnership Against Terrorism and Free and Secure Trade can expect their shipments to clear faster.

Because of the automatic $85 billion worth of federal budget cuts that took effect Friday, Customs will furlough workers, reduce overtime and hold off on hiring, resulting in the loss of several thousand of workers at ports of entry, said David Aguilar, head of the agency, in a March 2 letter to shippers. The agency’s budget will be cut by about 5 percent, or $512 million, according to the latest White House projections.

“Our security efforts will remain our highest priority. We will not allow degradation of our primary anti-terrorism mission,” Aguilar wrote. “We will prioritize core processing and facilitation operations for both travelers and cargo.”

Thomas Barnes, president of Con-Way Mulitmodal, said on Friday that Customs clearance at the Mexican border hadn’t slowed ahead of sequestration and the company was monitoring the situation to best route shippers’ cargo. Roughly 35 percent of Con-way’s truckload business originates from or is destined to Mexico. The slower waits at the border will likely spur shippers to shift more loads on the expanded intermadal shipping networks. Barnes described the Customs process at the U.S.-Mexico as “status quo” with some shipments taking a day or two to clear.

“I think the system needs a deep evaluation and overhaul,” he said. “The Customs process lacks the sophistication needed, and it’s going to be even more important to improve it as trade grows.”

The sequestration could also hamper the agency’s implementation of the Automated Commercial Environment, a long-delayed cargo processing system. Gaining more funding in the fiscal 2014 budget is key to finishing up the system that acts an umbrella for all Customs’ communications with importers, brokers and exporters. The federal sequestration could also slow the momentum of the Beyond the Border Initiative, an effort by U.S. and Canada to speed the movement of goods and people across the border.

The anticipated slowdown in processing cross-border shipments comes as U.S. trade with its neighbors, particularly Mexico, experiences healthy growth. U.S. trade growth with its North American Free Trade Agreement partners in December slipped 3.2 percent year-over-year to $71.9 billion, largely because a decline in the expansion of truck and pipeline shipments. NAFTA Trade ended the year up 6.2 percent from 2011, according to the Bureau of Transportation Statistics.